When I was in the 3rd grade in 1981, I drew the shortest straw and was assigned to write a country profile on Turkey. I knew nothing about the country, other than the obvious name-sharing with our traditional Thanksgiving bird.

It was my least favorite of all the reports I did that year. My rendering of Mehmet the Conqueror resembled later-years Van Gogh, as I got lost in trying to draw the turban and forgot his ear. 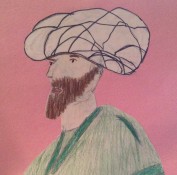 Then in 1997, I met a Turkish man who changed my life. Previously, having sworn off romantic love, I had decided that men were like hamburgers. We have one burger in the United States. You can get this burger with a myriad of different toppings – tomato, onion, pickle, cheese…and it has a different name based on the toppings combination. But essentially it’s the same burger. The same shape, roughly the same ingredients, most always eaten between the same tedious yet innocuous burger bun.

And then I met Tolga. And, shortly thereafter, experienced a savory explosion – a Turkish burger, or kofte.

Tolga explained that each region in Turkey has its own kofte, which isn’t merely the same burger with varying toppings. It’s an entirely different take on the burger itself. Texture, shape, spice – before the kofte is plated, you already know it will be something unique, something extraordinary.

If I can de-clutter and organize years and piles of recipes on sticky notes, Mercimek in the Oven will share my passion for Turkish food, a unique and extraordinary cuisine, and include a few personal anecdotes and traditions along the way…and, maybe even preserve some edible heritage for my 3-year old daughter, Ayla.  And the blog title? A coy Turkish euphemism for having sex – and a playful undercurrent for the subjects of food, family, and fertility!

Hosgeldiniz! I warmly welcome your comments and recipe variations!